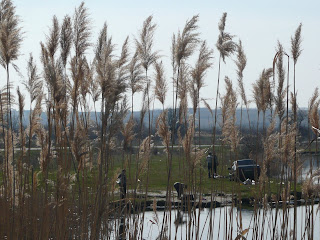 There's a stark beauty to the landscape in early spring. Last Sunday afternoon was warm and sunny. We took a long walk west of town following the river. Fish are plentiful due to the spring runoff and fishermen were pulling in their catches. Right now fresh fish can also be bought very reasonably - we're told, 3-5 grievna per kilo. Not bad - and a great way to supplement the usual diet. Dema, our manager is salting and drying them on his closed-in balcony much to the dismay of his wife who now has to hang her laundry everywhere throughout the house -and never mind the smell. 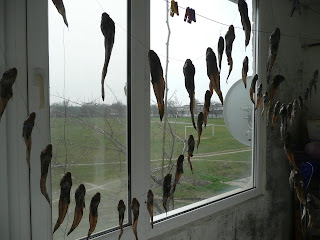 Nights are still frosty but that doesn't deter people from tilling the soil and planting their gardens. As we walk along we think again of our forefathers and mothers coming to this land, working the soil and reaping the harvests, and over time developing a thriving culture. The land is still very productive and we ponder - what has changed, why so much poverty? We know there are many reasons, mostly beyong the control of people we meet day to day.
We had visitors this week - Florence Driedger from Regina, former Social Work professor with a specialty in Restorative Justice, and Lucy Alexievna, Social Work professor in Zaporozhye plus one of her students. Over a number of years Florence has been a Social Development Consultant in Zaporozhye. She and her husband Otto have gained highly-respected reputations in Ukraine, in fact an organization has been named after her. The Florence Centre is involved in many projects - with elderly, families and students as well as working with the poor and disabled. It also provides practicum opportunities for students at the University which had been an unknown concept here. Our organization has provided scholarships for several social work students who have had part of their training at the Florence Centre. They mentioned that Lida and Oksana were among their best students. These are now employed in our region. We updated each other on various projects. It was an interesting morning. 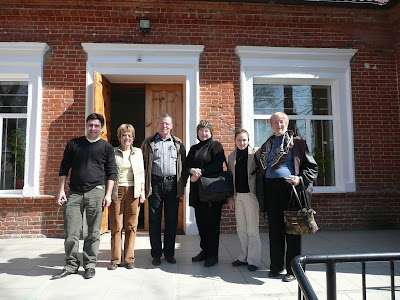 There are many social issues that make life more complicated here. Domestic abuse is a big problem, primarily verbal abuse, wives against husbands, possibly a consequence of huge unemployment numbers. Another form of abuse is that of taking advantage of vulnerable people. An example - told to us by the pastor of our church. Last year when credit became available people owning a passport needed only to show this document and they were able to take a loan from the bank. Most of them had no idea what a trap this could be, and they weren’t given any information or warnings. Several months ago a woman from Molochansk came to the this pastor and said, “either you help me or I will commit suicide." This is what had happened. In fall this woman had bought a fridge on credit valued at 1000 grievna with the agreement that she would make monthly payments of 100 grievna. This carried on until she became ill and missed two payments. When she was able, she resumed paying again and then was notified that she now owed 3000 grievna and was threatened that her house could be seized. In her utter desperation she approached the pastor who began to advocate for her but got nowhere. As further time elapsed the sum became 4000 grievna. The pastor and another missionary were able to put up the money and the woman is now repaying them the 4000 grievna, 100 grievna per month, interest free. She is one of the lucky ones.
So our days continue, we hear many sad stories. However, looking out of kitchen window we see the earth renewing itself. We look out on a soccer field. Each day we see many young people exercising and having a thorougly good time. We hope and pray that life is going to be easier for them. And in the meantime we try to alleviate some of the sorrow.
Posted by Baergs in Ukraine at 4:25 AM

You have a nice blog!

As a Ukrainian, I want to offer you a few friendly tips. We call our national currency гривня, or hryvnia in English. It's a countable noun just like the dollar: 10 hryvnias, 20 hryvnias, etc.

Ukraine is a noun; Ukrainian is an adjective.

Enjoy your stay in Ukraine!:)