These are grey days.  Trees have become bare and the air is filled with the acrid smoke of smoldering leaves.  At the Centre, instead of burning we are trying to set an example by composting, a practice not implemented yet in our area of Ukraine. For us these are also days of reflection - looking back over the past three months, recalling people we've met and projects undertaken.  Most memorable are times when we've been able to make personal connections. It's amazing what can happen despite language barriers.

Early on we visited Sasha, the 16 year old boy without arms. (for background information see  May 8, 2007 blog).  Since his tragic accident we have kept in touch with the family and have considered ways of helping him.  For major assistance we were advised to wait until he was grown. 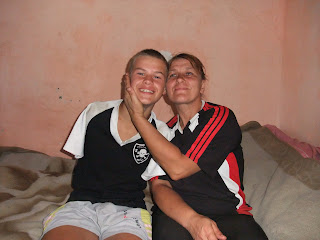 Recently we were surprised to see him with a friend, whizzing by on a bicycle. They were going so fast we almost missed seeing that his friend was steering and Sasha peddling. This boy isn't sitting on the sidelines feeling sorry for himself and his mother refuses to pamper him. The family lives in a little village in dire poverty, no father in the picture. Sasha's mother had work on a cooperative farm, but unfortunately this is seasonal. We plan to provide a computer for Sasha which will enable him to complete school assignments. Until now his education has been exclusively on an oral basis. The computer is ready - we're just waiting for a foot-operated mouse from America. Other issues under consideration are where to put the antenna and how to minimize risk of theft. The computer is going to be linked with our computers at the Centre and Dema will be able to monitor its use. We are so fortunate to have a manager who is also a computer whiz. The other idea we're exploring is adapting a bicycle or tricycle enabling Sasha to steer with his shoulders - hopefully set to go by spring.

Dmitri is young man in a very different dilemma.  He is a fifth year medical student. Last year he had the misfortune of being ill and missing three weeks of lectures. Consequently he was told that he was ineligible to write examinations even though he had studied and knew the material. At the end of the year he received a failing grade. Before the new term began he was informed that he would be admitted on the condition that he repeat the fifth year and no longer be eligible for the State Budget which meant paying much higher fees. What we would call extortion happens too often here. For a time it seemed that Dmitri would have to forfeit his dream. He is an orphan with few resources. For the past year his grandmother has sent him her pension; she survives on the equivalent of $2.50 weekly (earned by doing a little tutoring). We discovered that Dmitri had been living on a shoestring - his clothes and shoes falling apart, his rent in arrears. Then a series of miracles happened. Through a new financial arrangement he has been offered assistance with his studies and a big-hearted donor is covering his living expenses.

It's been a pleasure to connect with women in our little English class and in the Mom's group.  Last week they learned to make "Crustless Quiche", a recipe that uses ingredients that all of them have in their kitchen. Since then, they say, this recipe has been served in their homes with many variations. 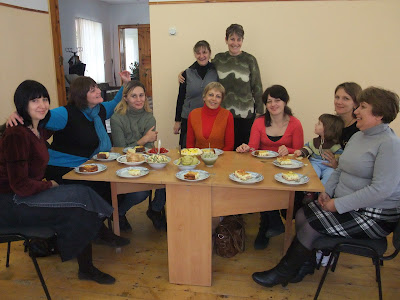 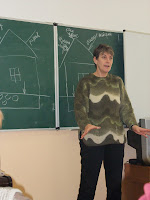 Each month we invite a guest for an inspirational or devotional meeting. Here you see Olga Rubel, our staff representative in Zaporozhye, teaching the importance of building life on a sold foundation of faith in Christ.  Several women in the group have very difficult life situations and find this women's group a safe place to confide and to find support. 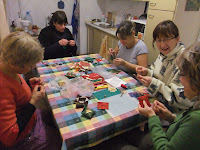 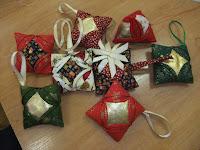 Last month we made a little craft project - could be a pincushion or a Christmas ornament. Someone had the brilliant idea of making enough to these little treasures as Christmas gifts for all the seniors coming to our lunches. Thursday evening we held a work bee. Thanks to a friend  in Canada we have wonderful fabrics to work with.  Since all the stitching is done by hand it takes more than half an hour to make one - producing another sixty will be a labour of love.

It's the place, but more so the people who will hold a special spot in our memories - those we've been able to help, those we've had the joy of working with, those we've learned to know and love, and the many who are making this work possible.  We thank you!


For more information on the work of the Mennonite Centre visit our website at   http://www.mennonitecentre.ca
Check out the December Newsletter for "gift options".
Don't miss the latest YouTube videos - Polonski Family - east of Kiev
- Two Mennonite Women - Stories of Survival
www.youtube.com /MennoniteCentre