Our town has a population of 7000 - over half of them pensioners. What would I as a babuschka face, growing older in Molochansk? We see the many little white-washed houses, some of them crumbling badly. Looking behind the scenes we find that many don't have running water - they may have a tap in their summer kitchen, but often not in the house. Therefore no means of showering or bathing. Personal hygiene is a problem.

Traversing the streets we see yellow pipes elevated about ten feet off the ground. Digging is happening below, indicating the long-awaited arrival of natural gas. The yellow pipes become a status symbol because not everyone can afford to connect - it is very expensive and it's mainly the elderly population that will continue to heat with coal. The gap between haves and have-nots widens.

If I were ill, how would I fare with medical care? A recent example: A resident in a small nursing home, partially funded by our organization, had a stroke. The ambulance was called. First question - "How old is this woman?" When told she was 71, they refused to come saying, "She is old, she will die anyway" - apparently the standard response for anyone over 65. Fortunately a Christian doctor advocated on her behalf and she was admitted the next day. FOMCU (Friends of the Mennonite Centre Ukraine) has renovated a Respite Room at the hospital which is warm, bright and comfortable; meals are brought in. Another woman was admitted to the Respite Room about the same time. She was brought in from one of the outlying villages and obviously hadn't bathed for a very long time; the odor was overwhelming. The Molochansk hospital was built 22 years ago and hasn't had hot running water for 21 years. What to do without warm water? We hope to address this issue shortly. The state provides doctor's salaries, but nothing beyond that. Any renovations at the hospital are funded by staff. We are told that people unable to pay for their needed medication, will also not be admitted to hospital, so many people suffer and die at home. FOMCU has medical emergency funds in 8 districts to aid in these and other medical situations. In addition we pay two doctors to hold weekly clinics at the 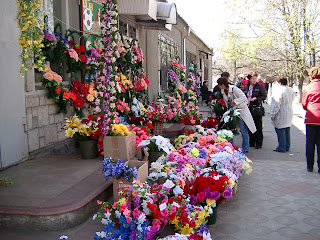 Centre, so that people can come for free consultations. 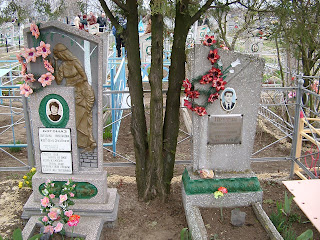 Even so, death comes prematurely to many. One
week after Easter is another Orthodox celebration, commemorating the dead. We notice volumes of bright plastic flowers appearing at every storefront. Families visit the cemetery bringing these flowers to adorn gravesites of their loved ones. People crowd in with food and drink; vodka flows freely. We are told that many deaths are tragically alcohol related. This problem is huge, related largely to unemployment. With the coming of natural gas, it is hoped that an increase in industrial activity might aid in alleviating this situation.
Posted by Baergs in Ukraine at 5:38 AM

As far as the village people always being intoxicated - this is because they have no hope for a better life.

They are RULED by Mr. Chip, former director of the Tavria farm there. Mr. Chip and all his friends there in Tokmak would always want to keep these people down - keep them in their place, so that he and his cronies in Tokmasky Region may continue to enrich themselves by paying NOTHING for the hard labor of these village people in Zelony Gai, Tavria, and the other villages.

I know - because I married a woman from Molochansk and I have been there. I have spent a few weeks in Zelony Gai - I have seen how the people in Tokmak treat these villagers - like DIRT.

I have seen how Mr. Chip and his wife at the Tavria farm steal the land of these villagers. I have seen how the people in Tokmak will simply REFUSE to offer services at the various government offices.

Thus - it is no wonder to me as to why these people drink.

If you good church-going folks REALLY want to make a difference - it will not be done by wringing your hands and complaining - it will only be done by BREAKING THE LEGACY OF CORRUPTION that currently exists in Tokmaksky Region.

SO - do you all have the GUTS to make a difference?

Or do you all merely wish to wring your hands and pray?