STEPPING INTO THE PAST

Over the past week we've had the pleasure and the privilege of delving into various aspects of our Mennonite past. We joined our friends, Peter 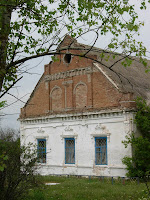 and Helene in their quest to find Helene's ancestral villages. She knew that h 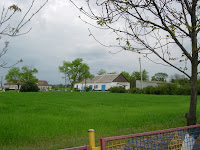 er maternal grandmother had married into the Nikolai Schmidt family, wealthy landowners of the Steinbach estate in the southeastern corner of the Molotschna colony. It wasn't difficult to find the place. Many buildings still remain and are maintained as part of an orphanage surrounded by lush green fields and golden meadows. Aside from a few young boys, the place seemed deserted. We took our time wandering through the area, sharing memories that had been passed along through the generations. Finding the village of Franzthal however, was another story. This was the village where Helene's father grew up. She knew the general location, even farther east than Steinbach, but had been told that nothing remains. Her father, for whom it was very important that Helene at least set foot on familial soil, had given precise instructions. "Get to the village of 'Nelhovtje,' go through and yo 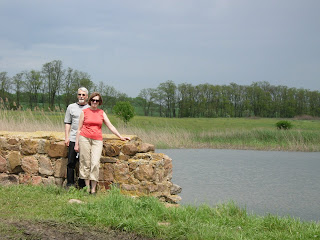 u will find a bridge over the Juschanlee river. On the other side is Franzthal." As a young man living in this region in the 1940's, it had been his job to deliver the post on horseback, riding from village to village. We managed to find "Nelhovtje", drove through the village in the direction of the river until the road became a narrow track. Should we carry on? As 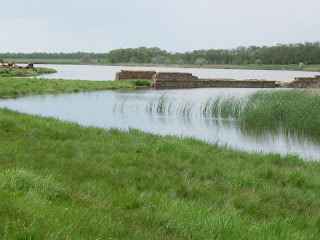 we sat and deliberated, a car drove up. Using what meagre Russia we had plus sign language we indicated that we were looking for Franzthal. The people in turn indicated that they would be right back and sure enough, in minutes found someone who could speak English. Yes, we could drive down the track and would soon come to the river. Before long a beautiful pastoral vista unfolded, but sadly the bridge spanned only half the river. As we strolled along the meandering stream, seeing a loon and a heron, we tried to imagine ourselves 150 years ago, glancing across the water and seeing a thriving Mennonite village with 3 flourmills, a brickyard and other businesses, farms and orchards.

A major highlight at the end of the week again took us back 150 years, but this time in a different direction. We had the opportunity of participating in a celebration commemorating the 150th anniversary of the formation of the Mennonite Brethren church on the site of the first MB church building in the village of Rueckenau. Together with many Ukrainians from surrounding 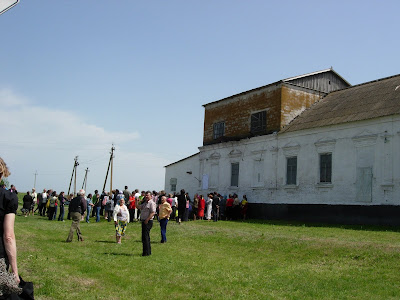 communities we joined an international delegation from Japan, Germany, Brazil and Canada. Unfortunately representatives from Paraguay were held up in Vienna due to a visa problem. As we waited for proceedings to get underway, it was a delight to see a familiar face, Margarita, who had spent a year in Abbotsford with the MCC Volunteer Exchange Program. She is now back home in Zaporozhye.
Interestingly, it was Ukrainian dignitaries who welcomed us to the commemoration. Elizaveta Vladyslavovna recounted the history of Mennonites coming to Ukraine at the invitiation of Catherine the Great to colonize the Russian steppes, on to the disintegration and tragic end of the Mennonite commonwealth. She asked us to honour our past and not be ashamed of our motherland. Repre 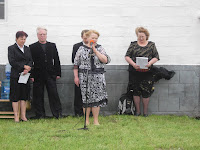 sentatives from the Zaporozhye Oblast and the Tokmak 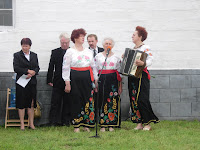 Region gave greetings. We were entertained by a Ukrainian folk ensemble and Marina Romanova sang an moving song in German and Ukrainian. In answer to my query about the text, she wrote out these words: Das Lied ist ueber Russland, die verlassen ist von Mennoniten. Sie muessen zurueck reisen. Es tut leid, das Elternhaus und Graeber zu verlassen. Translated: the song is about Russia, left by the Mennonites. They must return. It hurts to leave fatherland and gravesites behind. Greetings were relayed by Johann Matthies, MBMSI representative for Europe and Asia. David Wiebe, Executive Director of the Canadian MB Conference addressed the audience as well as giving greetings from ICOMB, The International Community of Mennonite Brethren. Rev. Moriki H 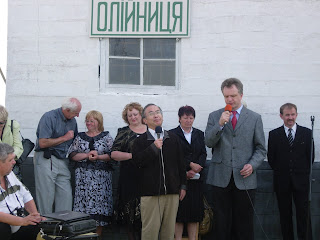 atakenaka from Tokyo spoke about the chain of events causing Mennonites to leave Ukraine, to move to North America, then to come to Japan as missionaries sharing the gospel. He closed with a prayer of gratitude. Then finally, the unveiling of the plaque engraved in Ukrainian, German and English. Mounted next to a pole which once held a communist flag on the wall of what is now a sunflower oil factory this memorial drew Ukrainians and Mennonites from around the world together in unity and will remain a symbol in the community. 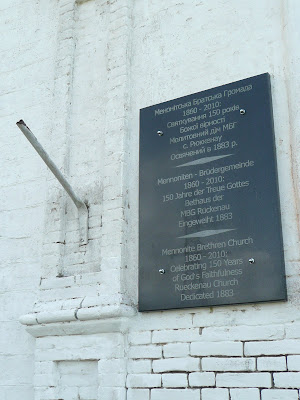 Posted by Baergs in Ukraine at 7:26 AM