A DRIVE THROUGH THE COUNTRYSIDE

As far as we know there are only two people still living in the former Molotschna colony with direct ties to our Mennonite past.  Each time we return we wonder, will they still be there. Both women are in their 90's.  Both women survived the sufferings of the Stalin years. Both women live at home, looked after by family that care about them. Last week we decided to take a day and look them up, heading first of all to Vladovka, the village that now encompasses both former villages of Hierschau and Waldheim. To get there we pass through Landskrone - there is nothing left to identify this former Mennonite village. When we first came to this area of  Molotschna in 1997 a landmark stood out on the landscape; a lone brick wall, the remainder of the church Rudy's mother attended in her childhood. The outline of Gothic-shaped windows with buttresses between testified to a grandeur that once was, the architecture so different from anything else in the area. 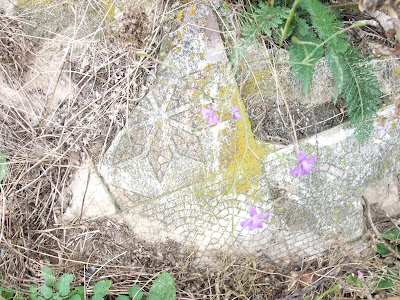 This day we look for a knoll on the flat landscape.  It's not the first time we've dug around in the overgrown rubble.  Sure enough, we find what we're looking for - more tiles, adorned with a distinctive floral pattern once composing the floor of the church. We take them with us to place in the museum room at the Mennonite Centre.

Another kilometer down the road and we pull in to a little driveway. As we walk to the door we see Margareta Krivetz, nee Plett, looking through the window. She's still alive and recognizes us immediately - a joyful reunion with Rudy's second cousin. 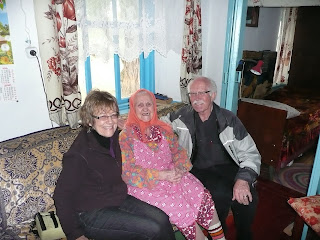 Previously, Margareta had told us her story - how she and her mother had made their way to Moscow in 1929; how they with many others had been denied emigration and been forcibly sent back.  Margareta married a Ukrainian and they had four sons.  All have died, two sons as a result of  the Chernoboyl.disaster.  She feels blessed that a daughter-in-law has taken her in.  Margareta struggles a bit to communicate in German, but gradually the words come back.  Recalling life with her husband she said, "Ich hatte einen goldenen Mann."  I had a golden husband.  We sing "Gott ist die Liebe" together and there are tears.  Perhaps we can see her one more time before we leave Ukraine. 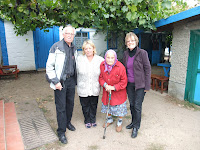 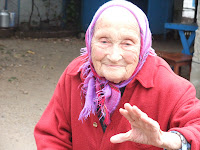 We now head southwest, passing the first MB church building in Rueckenau, and then on through other villages to Alexanderkrone and the home of Rita Pankratz.  She is out in her yard, greets us warmly and tells us that she will soon be 93.

As we sit outdoors for the next half hour, she reviews her life in fluent German. She recalls how her husband was taken away in the latter 1930's and how she and her two young children were sent to Siberia.  She told us it was so far north that there was snow year round, and how hard she had to work outdoors those long and difficult ten years.  Miraculously one day word came that her husband was still alive.  He had been released and able to return home.  He was hoping that she hadn't remarried and would she want to rejoin him. Returning home again to the same house she lives in today was beyond her dreams.

In recent years the family has been greatly helped by donations from Mennonite tourists that have come by.  She is deeply grateful for this and also that her grandson is able to study aided by our scholarship program. Again we couldn't leave without singing - we joined her in four stanzas of "Wir warten auf den Heiland bis Er kommt."  Both these dear women have a faith that has sustained them through all the difficulties of the years. 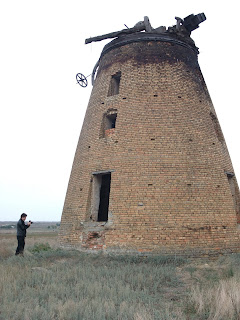 One more short stop before we head for home. Just around the bend of the road leading from Alexanderkrone is the remains of an old Dutch-style windmill built long ago by Abe Konrad's grandfather who was a skilled mill builder.  It operated until 1952 and still stands as a sentinel on the steppe land.

This has been a day of immersion in Mennonite history.  We are reminded that it's because of our history that we are here and we feel a strong personal reconnection to our past.  Though sadly we see tangible evidence of our ancestral civilization gradually fading away, it is the people we have come to help.

Had we not been in Kiev last weekend we would have attended a Ukrainian Mennonite conference gathering at Kutuzovka.  Six out of eight congregations sent members to this celebration - some 150 people came together.  Though not ethnic Mennnonite in origin, it is very encouraging to know that these people are making positive contributions to their communities. There is new history in the making.


If you wish to contribute to the work of the Mennonite Centre in Ukraine make your Canadian cheques to "Friends of the Mennonite Centre in Ukraine" or "FOMCU".  Cheques from American donors should be made out to "MFC-FOMCU".  All cheques should be mailed to George Dyck, Treasurer,  3675 North Service Rd.  Beamsville Ontario, Canada  L0R 1B1  Check our website at http://mennonitecentre.ca/ for information on credit card giving.   All contributions are greatly appreciated

Posted by Baergs in Ukraine at 2:08 AM