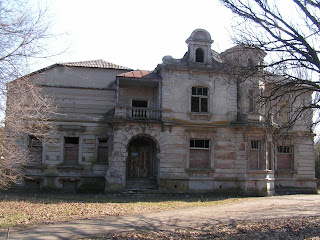 As we tread the streets of Molochansk we often feel that we are caught in a time warp. There are many reminders of our ancestral past. In fact almost everything looks of that vintage. Our town, fomerly Halbstadt, was settled in 1804 by Mennonites migrating from Prussia in pursuit of freedoms of faith and conscience. Over the next century Halbstadt grew and prospered, becoming the industrial, commercial and administrative hub of the Molotschna colony. Today people live in poverty, with little knowledge of their historical past. Interest is piquing, however. Last week we spent an afternoon with two students who were gathering information for a class assignment. Natasha and Tanya were particulary interested in finding what they could on the building next door to our apartment. Looking out of our kitchen window we see what remains of the Heinrich Willms mansion. This grand residence belonged to the owner of the local flour mill. Built in 1908 at the cost of 100,00 rubles, it was referred to then as a "palace". The gardens surrounding it are now the town park; a tall statue of Lenin holds pride of place. The girls were also fascinated to discover that their "Palace of Culture" in the centre of Molochansk was once a Mennonite secondary school for boys.

Recently the town gave this building a facelift by painting the exterior to resemble the brick color of the past. It looks great from a distance but the facade is definitely only skin deep.

Visitors often drop in at the Mennonite Centre looking for information. Recently a group of Holdeman people arrived from Arkansas. Their ancestors had left this area for America in the 1870's. They particularly enjoyed our historical photo display.

Last week it was also our privilege to bring good news to "farmer George". Our organization has agreed to provide a loan so that he can purchase a tractor and begin farming on a bigger scale. It is intriguing to realize that this man's land is adjacent to the former village of Rueckenau, the location of the very first Mennonite Brethren church. This man, not an ethnic Mennonite, is a member of the Bolkovo Mennonite Church. In a small way, history is repeating itself - in the first part of the 20th century, MCC provided tractors for Ukraine, now almost a century later we have the joy of doing so again.

Posted by Baergs in Ukraine at 6:36 AM

Hi Hildegarde.
We are missing you at MCC. It has been very busy. The clothing Shop had a Storewide Sale today Friday, March 30 and tomorrow March 31. They operated 4 tills. Have a blessed Easter. Evelyn

I am really enjoying your blog! Thanks for posting photos as well.

I admire you both for your availability during these your retirement years to serve the Lord in this way. The people there are surely blessed by your smiles and loving spirits! God bless you and keep you safe each day - especially on those roads! You are in my thoughts and prayers.

A belated Easter greeting! We appreciate very much your descriptive blogs and great pictures. We would love to visit the sites of our parents' villages with you. We look forward to your visit upon your return and a first-hand account of your exciting ministry adventure. Love and blessings! Arn and Ann