A Sad and Difficult Journey

Baba Vera completed her life's journey two days ago. Today she was buried. We were requested to attend the funeral and provide transportation for several others. For the past month Baba Vera had been tenderly cared for in the small nursing home run by the Kutuzovka church and also partially supported by FOMCU. Then last week she had a stroke and as mentioned previously, was admitted to our Respite Room at the hospital.

As we came into her village, about 25 km. to the north, and approached the little house, we saw a few mourners gathered outdoors around a simple coffin. Baba Vera had no immediate family.
Only a month ago her son died; drank himself to death. To support his addiction, he had gradually sold off the furniture, toward the last even the bed of his mother. When she was found, she had been sleeping on two chairs, covering herself with a jacket. There was nothing else but trash in the little sod floor house. 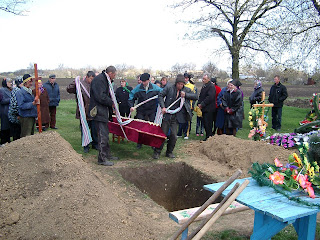 Our pastor, Jacob Thiessen, conducted a short service; church members sang and then, led by someone carrying the Orthodox cross, we followed the procession to the cemetery - the
casket following on the back of a dump truck. At the graveside the wailing started and after the casket had been lowered into position (the hole was actually dug too short- someone had to jump down and do more digging) people one by one threw three handfuls of dirt onto the coffin, another Orthodox custom.

Baba Vera was buried next to her son. Yesterday it had been difficult to find village men sober enough to dig the grave, and even today the graveside attendants 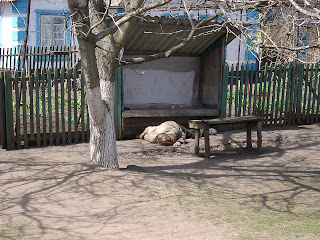 Alcohol wreaks havoc in this country. It is a particular scourge in the villages. Every little store has shelves of liquor. Unemployment often leads to depression leads to drink. In our town, to make some money, many men and even some women leave their families for months on end to go to Russia where they find work. These are the enterprising people. For many, even this, isn't an option. Village life, which used to be so idyllic in simpler times, may eventually be a thing of the past. Today many young people go the cities and don't come back. There are still over 60 villages in existence in the former Molotschna colony.

Posted by Baergs in Ukraine at 4:03 AM