This has been a week brimming with experiences, some pure delight and others thought- provoking. On Monday evening we boarded the train for the nine hour journey to Kiev. We'd heard various comments and warnings were we ever to attempt this mode of travel. For example, "Don't drink too much before you depart because you don't want to have to use the washroom." Or "If you value your well-being politely decline the offer of tea, because the same lady making the tea also cleans the bathrooms." Needless to say, we had some apprehensions, none of which materialized. Dema, who grew up in Kiev, accompanied us and we were graciously hosted by his in-laws. His knowledge of the city was invaluable to us as we visited many historical sights. It was pure joy to share these experiences with Peter and Helene, friends from home. We met them at the airport and allowed them barely enough time to catch their breath before the sight-seeing began. 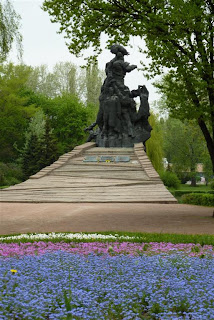 Most heart-rending was our visit to the Babi Yar Memorial commemorating the loss of more than 33,000 Jews during the genocide that occurred at the site on Sept. 29-30, 1941. The bed of forget-me-nots was a poignant reminder. Our day ended with a stroll through the centre of the city at dusk, seeing the sunset on the Dnieper River and the lights illuminating monuments and historical places.

Next morning we met up with friends, Kim and Wes Janzen and their three teen-aged children who are currently in Ukraine with Music Mission Kiev. Part of Wes' assign 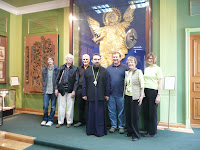 ent is serving as guest conductor of the Kiev Symphony and Chorus. He also teaches up to 100 students at the seminary at St. Michaels Ukrainian Orthodox Church and has developed a warm relationship with the Metropolitan. We were invited to join them on a one-hour tour of the cathedral museum/gallery. It was inspiring to see these two men, the #2 official of the Ukrainian Orthodox Church and an evangelical musician/missionary relating as kinsmen in the faith, both concerned with building God's kingdom. We had the opportunity to tell them about our work at the Mennon 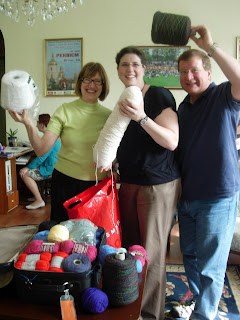 ite Centre. Similar to what we do, Music Mission Kiev also helps widows, orphans and conducts children's camps. The Horbans had brought a suitcase plus several big bags of wool sent by John and Rita Thiessen for their widows group. There was great rejoicing at the unpacking!
We were invited to return in the afternoon and listen to Wes rehearse the Symphony Chorus in Haydn's Creation and Monteverdi's Beatus Vir. What a wonderful choir - all music academy graduates. Had we been fluent in Ukrainian we would have been tempted to join in. We gratefully accepted the Janzen's invitation to dinner and joined them at the opera in the evening. The performance of Donizetti's Elixir of Love at the grand National Opera House was the crowning event of the day.

During the mid-day interval we visited the Chernobyl Museum, another worthwhile experience. It was sobering to learn that this disaster was a horrific consequence of poor decision-making.

On our final day, a guided tour of the Golden Gate of Kiev gave us a broad understanding of the history of this city. It was interesting to see parts of the fortification wall still in existence, dating back more than 1000 years. We concluded our sightseeing by visiting St. Sophia's Cathedral. This complex with its 13 golden domes blending into the skyline dates back 900 years. We climbed to the top of the bell tower and enjoyed the panoramic views. 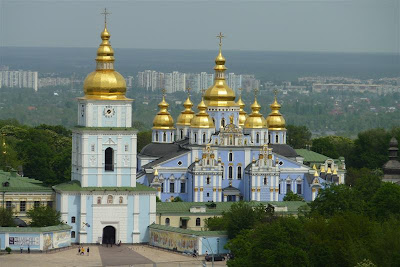 The picture was taken from the bell tower and shows St. Michaels in the distance.

Another 9 hour night of shaking and rattling as the train brought us back to Zaporozhye. We are left with a rich array of cultural, spiritual and historical experiences and memories to ponder.
Posted by Baergs in Ukraine at 10:50 AM

Thanks for this blog and the images. They resonate with my Ukraine experiences.

Some years ago, the late Rabbi Jordan Pearlson, a longtime friend in Toronto wrote this, which we use annually at the Menorah site at Babi Yar:

Kaddish - The Jewish Prayer of Mourning, in a version for the Mennonite Heritage Cruise by Rabbi Jordan Pearlson, Toronto (Rabbi Pearlson notes that the names of “God” or “Yahwy”are not mentioned in strict Hebrew theology, but are referred to in other generic terms. But being a Reform Rabbi, Pearlson suggests we use our usual terms: “the important issue being your Mennonite identification with the God of History and with the realities of the Holocaust”).

You may want to join in this Litany at the Babi Yar site. Kaddish for Mennonites

Leader: May God grow exalted and sanctified in the world that God created as God willed. May God give reign in your lifetimes and in your days, and in the lifetimes of the entire Family of God, swiftly and soon.

All: Amen. May God’s name be blessed forever and ever.

Leader: May God’s Name be blessed forever and ever; Blessed, praised, glorified, exalted, extolled, mighty, upraised, and lauded be the Name of the Holy One, Blessed is God.

All: Blessed is God.

Leader: Blessed be God beyond any blessing and song, praise and consolation that are uttered in the world.

All: May God make peace with us now who mourn. Amen and Amen.