A TOWN IN SEARCH OF A HERO

Shortly after our arrival in Ukraine we were told that we should try to visit Gulyaipole, a town situated about 100 km. from Molochansk. The Ukrainian tour guide who was telling us this also mentioned that the town has either an ignominious or else a proud history, depending on which person there, you might be talking to. Apparently the town is divided in this matter. 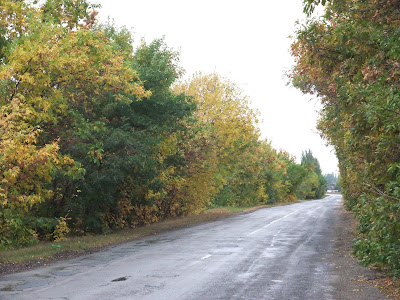 Last Thursday we decided, would be the day.  The way there wove through beautiful farmland.  Trees along the roadside were beginning to change colour. The town of Guyaipole is on the eastern edge of the former Schoenfeld Colony, unfamiliar territory and the history unknown to us.  We find out that Mennonites first came to this area from Molochna in 1868 and remained until 1919. 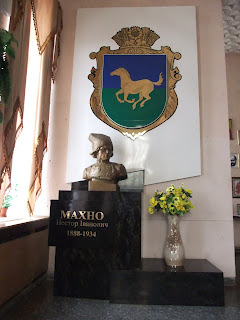 Gulyaipole is the birthplace of Nestor Makhnov and was also for a number of years the headquarters of his army of insurrectionists. It is doubtful that there's a person of Russian Mennonite heritage who hasn't heard this name. Years ago his name struck terror in the hearts of our parents and grandparents because there was hardly a family that hadn't been affected in one way or another by the lawlessness and anarchy that erupted in 1918. Extreme atrocities were committed by Makhnov and his guerrilla bands, pillaging, murder and rape. In 1919, at its peak, he had an army of close to 100,000 men. Houses were destroyed, fields devastated and land seized and redistributed. At first, large rural landholdings were the primary targets. Personally, my grandparents were driven from their estate not too far from the Schoenfeld Colony, buildings were burned to the ground and grandfather died somewhere in flight.

Gulyaipole has a museum named in honour of Nestor Makhnov. We walk into the building and are greeted by the director who gives us an extensive tour. On display are artifacts dating from antiquity to the present time. We come to the section that deals with the period of the Russian Revolution and the Civil War. 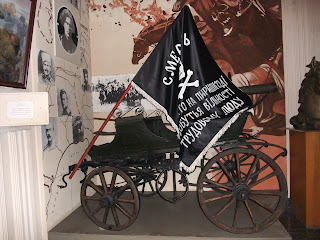 It is jolting to see a wagon, which we are told is a Mennonite wagon expropri-ated by Makhnov. 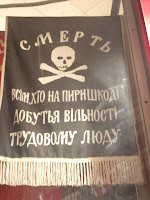 Mounted on the wagon are guns and the black flag of death. The inscription reads "Death to all who stand in the way of freedom for the working people." For many here Makhnov remains a folk hero.


The museum also covers the Soviet period. We are told that Gulyaipole flourished during this time - that it had sixteen industries and employment. Today, she says, the town has only two. One is a bakery, owned and operated by a Turk. She didn't divulge the second though asked, which leads me to think that it could perhaps be tourism. The name of Nestor Makhnov lives on and the museum is impressive. 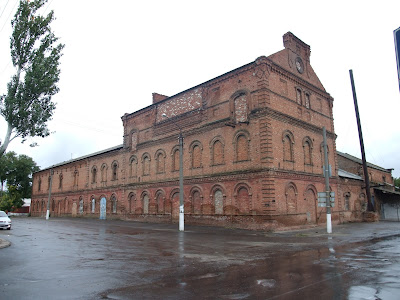 In the neighborhood of  the museum is another impressive building. We are told that in Mennonite times this was the Kreuger implement factory though Victor Penner tells us this hasn't been historically substantiated. Architecturally it looks similar to other Mennonite buildings. 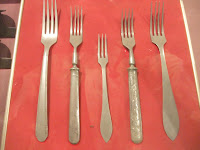 On display in the museum we had seen sets of cutlery, purported to have been manufactured in this building, perhaps by Mennonite craftsmen. Today the building appears to be standing idle.

The visit leaves us emotionally shaken. We had decided ahead of time that we would come to listen without being confrontational. We leave a copy of the Ukrainian translation of Rudy Friesen's book "Building on the Past". It was gratefully received.  We hope this can help to broaden understanding of this difficult period of history where anarchy and destruction held the upper hand.

At the Centre not a week goes by where we do not have international visitors.  It is a pleasure to show people around and to tell them what we do and why we are here. So we try to keep on increasing our historical knowledge in order to wisely interpret our past.


If you wish to contribute to the work of the Mennonite Centre in Ukraine make your Canadian cheques to "Friends of the Mennonite Centre in Ukraine" or "FOMCU".  Cheques from American donors should be made out to "MFC-FOMCU".  All cheques should be mailed to George Dyck, Treasurer,  3675 North Service Rd.  Beamsville Ontario, Canada  L0R 1B1  Check our website at http://mennonitecentre.ca/ for information on credit card giving.

Posted by Baergs in Ukraine at 3:32 AM