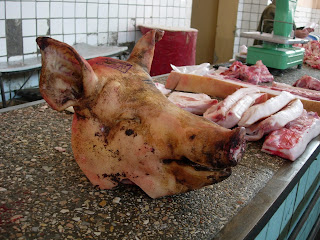 One of the pleasures coming into a new country is trying out cultural foods. Recently I've been identified as a "true Ukrainian" just because I've tasted salo. It took some courage biting into the piece of pork fat, this coming from a person who has always meticulously trimmed all the white from any meat. But, not so bad, in fact it was surprisingly tasty. Ukrainians love salo. Slabs of this salty flavored pork fat cover several tables at the Tokmak bazaar and holding pride of place amidst these mounds is a pig head. The story goes that salo became popular when the price of meat was out of reach for most Ukrainians. Now it's become a fad with unique inovations. We are told that small sticks of salo, covered in chocolate have become available at some of the posh restaurants in bigger cities. 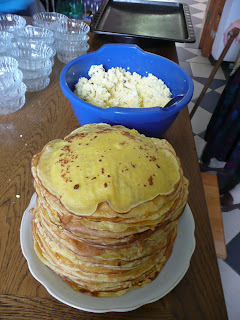 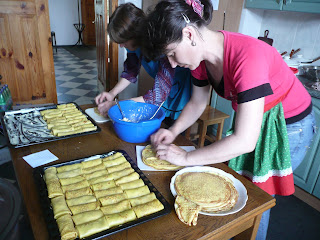 Just around the corner from the salo tables is the dairy section. Women sell large batches of homemade tvorog another mainstay in the Ukrainian diet. It is a cross between ricotta and cottage cheese, but doesn't really taste like either. It can be eaten with jam & sour cream for breakfast, as a snack or used in all sorts of sweet and savory recipes. I've made blinchiki - stuffed crepes, syriniki - fried patties, and zapikanka - baked with a bit of cream of wheat, raisins and sour cream, often eaten for breakfast. Fcoosna, delicious! Adjacent to the tvorog section one can find varieties of soured milk - yogurt, kefir and riazhanka (boiled milk with sour cream added), each with its unique flavor and texture and much more tasty than expected. 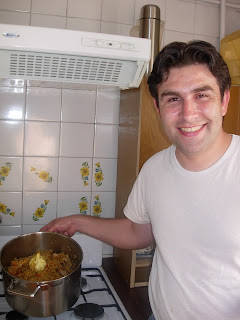 Last week Dema and Oksana invited us for Plov, pronounced plaof. He is the Plov expert and we discovered that there is an exactness to the preparation, in fact there is a ritual. It is cooked in layers of browned meat, onions, carrots and rice with special seasoning. Apparantly the dish originated in Uzbekistan but has been adopted in many Central Asian cultures. It is said that there are as many recipes for Plov as there are cooks. As we watched the chef at work we were given step-by-step explanations. NEVER EVER stir the rice when making plov. Again we found that it is possible to take simple ingredients, combine them in a certain way with sensational results.
Food and water - necessities of life. Over the last few years as we've travelled around the Molotchna area and visited former Mennonite villages, we became aware that the village of Neukirch, now Udarnik, population 340 inhabitants, has no water. For at least ten years they have been trucking in water because the wells are "sour". Last year the Mennonite Centre donated a water tank to the village school so that children would have the opportunity of washing their hands. We visited the school recently and were told that they are now in the process of providing drinking water for their students. Many things we take so for granted are a luxury here. It has been our joy to be able to help this school. 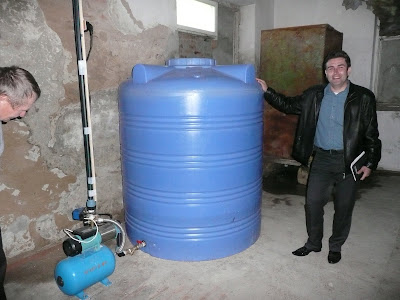 Posted by Baergs in Ukraine at 9:27 AM