By God's mercy the rains have come - just in time. It hadn't rained for more than six weeks and the land was parched. Now you can literally see things growing. This is vital not only for the many kitchen gardens that provide sustenance to our people but also for the vast fields of grain that produce a large part of the Ukraine economy. Barring drought, it has been estimated that Ukraine will export 6 million tons of wheat in the year ending June 2009, compared to 700,000 tons in 2008. And by September the barley export is expected to be 6 million tons up from 1.7 million tons in 2008. If all goes well - a triple increase. 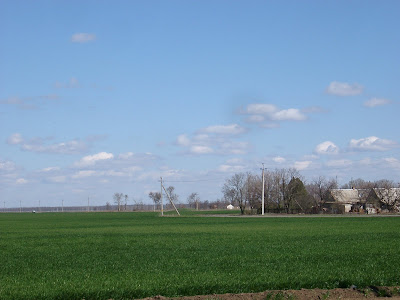 Further deeds of mercy at our doorstep. Several days ago a letter appeared on our desk, delivered from across the street. Back in early spring an elderly neighbor asked for help. Dema, our manager, and Vitaly, our maintenance man responded. This is a direct translation of her letter.

Thankfulness:
I thank you very much, the Directors of the Centre, for helping me with sawing down the trees in the yard in front of my house and sawing it into firewoods. That was done by Dmitry Ivanovich and Vitaly Tutik free of charge. I thank them very much.

I am almost 80 years old. All my life I worked hard, brought up my children, I'm a participant of the war, I am weak and sick. I need an operation on my eyes, but I can't because of circumstances of my life. My son worries me every day. He is an alcoholic. He was in prison not only once. He doesn't work. Sometimes he beats me and promises to kill me when is drunken.
So I thank the Centre very much for helping me. May our Lord bless you all good successes in your activities and good health.
April 28, 2009 With respect (Signature)
Another recent experience with a neighbour, living a short distance from us. I was introduced to Raisa in the fall of 2005. She is a widow, of German descent, who married a Ukrainian. She has lived alone for many years and become reclusive. She has, however, allowed a few people into her life. Being able to communicate in German helps. When we returned this year were told that she had lost her mobilibty and become bedridden. A merciful family in the neighborhood bring in meals three times daily and provide personal care. 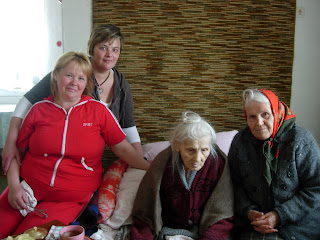 Last Friday Raisa turned 88. I was invited to join several others for a birthday tea. Raisa was not told in advance because she probably would not have allowed it. Contrary to her incapacitated physical condition she is mentally alert and hasn't lost her feistiness. She has no children. Her deceased husband's relatives have been pressuring to place her in the psychiatric hospital, the only, but very poor option for institutional care. She has flatly refused. Seeing her frailty and her ulcerated legs and hearing about her struggle was heart-wrenching. Medical aids and equipment we take so for granted at home are unknown in local towns and villages. We hope to be able to implement some ideas to help make her more comfortable. At the suggestion of her neighbour, I brought her a light-weight head scarf. She had only very warm ones. Her immediate response was, "I will save this for my burial".
Similar stories are repeated over and over again. We hope shortly to revive the Mercy Group who will visit the housebound in order that these needy people are cared about and not forgotten.
Posted by Baergs in Ukraine at 11:39 PM