Recently we heard a lament expressed that contemporary Ukraine has no cultural identification. This is not to say that there are no artists, that there is no literature, no music or dance. But it is a sad fact that the Ukrainian state does very little to promote or encourage cultural expr 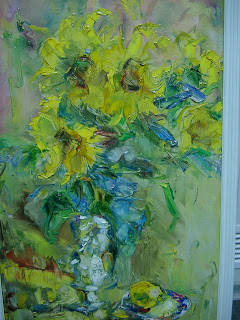 Several examples from recent experiences. Earlier this month we met with the friend of a recently deceased Ukrainian painter, who showed us a portfolio of this artist's work and told us a little about his life. This man was born in Molochansk. His mother died in childbirth; his father was recruited into the war where he met his death. He was raised by his grandparents. Later he moved to Melitopol where he received an education and became known as a painter, eventually becoming a member of the European Union of Artists. Twenty years ago he fell ill. Due to poverty and poor medical care a leg was amputated. A subsequent broken marriage led to depression and alcoholism. An artist friend supported him through this low period and helped him regain a measure of health. They married and he continued to paint. He had exhibitions in Poland, Belgium, Netherlands and America. Two months ago he died; had he been able to afford medication this needn't have happened. Friends are now hoping to commemorate this artist by publishing a book of his collected works. The question: "Would we be willing to help?" He had lived in poverty and there is no money from the State. We visited his little home and saw a number of his canvases. There is a wonderful vibrancy about his work. Sadly he is better known outside the country than in Ukraine. 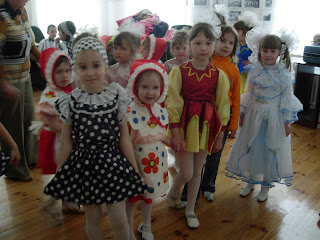 Perhaps it will be Ukrainian children who will eventually lead the way and Ukraine does love its children. Last week 30 little kindergartners visited the Mennonite Centre to perform for seniors coming for lunch. What a delightful energetic concert! They sang and danced without inhibition; the seniors love it.
A day later we accompanied a group of 18 young people from the Tokmak Music School to a state dance competition in Dnepropetrovsk. This meant a 3 hr. drive by marshrutka and an overnight stay in an internat. We watched 100 performances, 30 of which were chosen for the Gala Conce 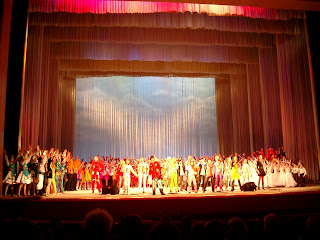 rt the next day. The weekend was a visual extravaganza.
The older group of 6 girls from Tokmak distinguished themselves by winning two awards. We were struck by the high calibre of dancing and choreography. FOMCU had made it possible for this group to compete and we were thanked over and over for providing assistance. Not only did the group work very hard to make it happen; it was also a great learning opportunity for dancers and their teachers as well. No doubt, Ukraine has a culture and needs to learn how to be proud of it.
Posted by Baergs in Ukraine at 4:00 AM

I continue to enjoy your blog! Your postings are choice accounts of what you are experiencing. These entries would be wonderful for a book project when you return home. How about "Retreadment in the Ukraine"!? I'm sure you could come up with a better title! The pictures are great too. Thanks so much for the effort that you are making to keep us informed.

I found this latest entry especially about the children very interesting. I would have loved to have seen that event. You are very blessed and are also being a blessing as you provide assistance in whatever way you can.

As I read about the healthcare system over there or the lack of it is a better description, I was reminded of how much we have in Canada. "Lord, help us all to be grateful for our abundance and not to complain!" It is difficult to read about the suffering of so many seniors and others as well.

God bless you and continue to use you daily. I pray for your health and safety. Thinking of you today. Ross sends his greetings along with mine.

Hi Rudy and Hil
Having just scrolled down through your last few entries I am reminded of so much we saw in our years in Africa - in fact, Ukraine sounds more difficult in many ways, and the cold makes it worse. While we were enjoying Songs Strings and Steps you were enjoying a wonderful cultural event too. Sounds fascinating.
The sun is filtering its early evening soft colour as the trees, bush and grass glow bright green. Yesterday we saw the first 4 baby goslings guarded by mama and papa goose as a racoon marched grandly by, looking neither left or right for fear of arousing their ire! We are so blessed in our new home by Fishtrap Creek Park.

Blessings in all you do
Love Art and Ruth

We have had all sorts of problems trying to log in and comment. Before we send a longer letter, we want to see if this gets through.

Greetings
WE have had problems with our computer lately. Did you receive the last e mail with news re MCC and minutes? Evelyn